Cooperation between DEPA, BEH and GASTRADE to promote the commercial operation of the “LNG Terminal in Northern Greece” in Alexandroupolis 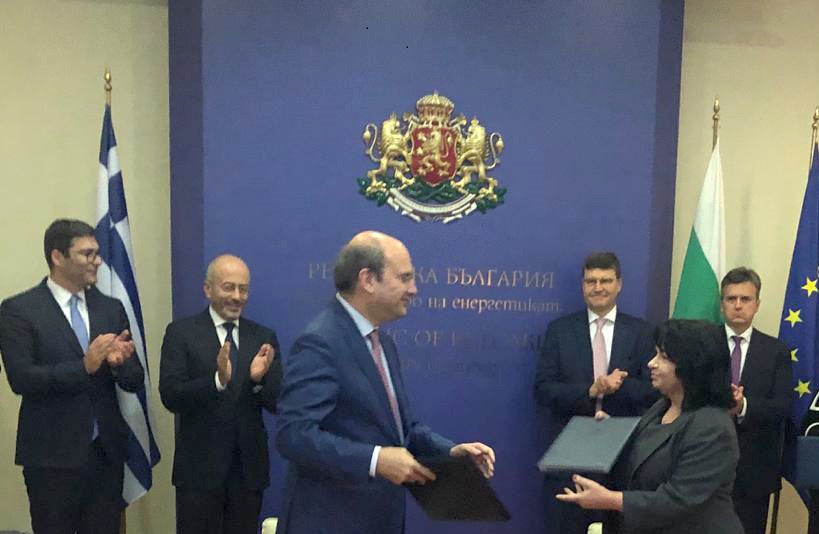 The signing today in Sofia of the final Agreements, in the presence of the Bulgarian Energy Minister, Ms. Temenuzhka Petkova and the Hellenic Republic Minister of Environment and Energy,  Kostis Hatzidakis, setting the cooperation framework, signals the start of the Greece-Bulgaria Gas Interconnector (IGB) construction.


DEPA was represented by the BoD President, Mr. Ioannis Papadopoulos, its CEO, Mr. Konstantinos Xifaras, the Executive Director of Gas Supply, Commercial and International Activities, Dr.  Konstantinos Karayannakos, the Director of International Activities, Mr. Dimitris Manolis and the Antitrust Compliance Officer, Mr. Thomas Amorgianiotis.
Apart from the Intergovernmental Agreement, which sets forth the construction and operation terms of the pipeline by ICGB, and the obligations of the two parties, the following were also signed:

It is a project establishing new prospects for DEPA and the gas market in the greater Southeastern Europe region. The project diversifies the energy mix of Bulgaria at a competitive cost and also constitutes a new field for the Greek gas market demonstrating the strategic role that it can play in the gas supply segment in the greater region of Southeastern Europe.
The IGB interconnector shall connect the gas network of Greece with the Bulgarian one but also with the networks of other Balkan countries and, indirectly, with the Central and Eastern Europe markets (Hungary, Austria, Ukraine).
The gas pipeline will connect the Greek national gas system from the area of Komotini with the Bulgarian in the area of Stara Zagora. Interconnection with the TAP pipeline is also provided for in the area of Komotini.
ICGB AD, whose shareholders are the Bulgarian Energy Holding–BEH with 50% and IGI POSEIDON with 50%, is responsible for the development, construction and operation of the pipeline.  DEPA and EDISON equally participate in the latter. DEPA, therefore, indirectly participates in ICGB AD with 25%.
The Project is included in the 3rd list of the European Commission with Projects of Common Interest, based on European Regulation 347/2013, and was included in July 2015 in the list of priority projects of the initiative for Central and South Eastern Europe Gas Connectivity– CESEC. Co-funding by the EU, through the European Energy Program for Recovery (EEPR), with €45 million, and through the structural and investment funds (Bulgaria Competitiveness Program) with €39 million, has been approved.
The pipeline has been designed to operate in two phases. In the first phase, with estimated start date 1 July 2021, the initial pipeline capacity will be 3.0 bcma of which 2.7 bcma will be offered for long-term products while 0.3b cma for the short term.
In the second phase and subject to additional commercial interest, the pipeline’s capacity maybe  expanded to a Total Capacity of 5 bcma with the  addition of a compressor station, of which 4.5 bcma will be offered for long-term products while 0.5 bcma for short term. A long-term product is the one binding the company for a period over 5 years while short-term commitments are related to products with duration less than one year.
DEPA’s CEO, Mr. Konstantinos Xifaras, stated on the issue: “The interconnection with Bulgaria constitutes a significant step establishing new prospects for the energy security and sufficiency of the greater region. Our vision is to decisively contribute to the expansion of investment horizons and the proliferation of business opportunities across the entire range of energy activities, in Greece and abroad, as setting the prerequisites for the secure supply of the market at competitive levels and on a continuous basis is essential”.